Even before the 20th century, Dresden was renowned as one of the most wonderful German cities... 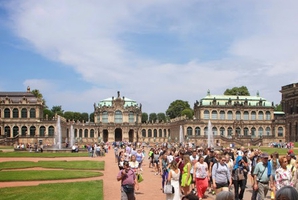 Built in the 18th century the Zwinger is one of the most splendid baroque settings for court festivities and was later used as a home for exhibitions of the royal collections. Located there today: Old Masters Art Gallery & Porcelain Collection as well as the Scientific Collection Mathematisch-Physikalischer Salon.

The most works were collected under the reign of Augustus the Strong and his son in the 18th century. Next to the already collected works from Dürer and Cranach, masterpieces came from the italian renaissance, such as Raphael‘s Sistine Madonna or Giorgione‘s Sleeping Venus and Titian‘s The Tribute Money. Another import aspect lies in the Flemish and Dutch painters of the 17th century, like Vermeer, van Dyck, Rembrandt and Rubens. Due to their evacuation, the paintings survived World War II and have become one of the most important art collections in the world.

Porcelain Collection at the Zwinger

Augustus The Strong was obsessed with porcelain from east Asia. After „white gold“, the first European hard porcelain, was invented in Dresden, Augustus the Strong could establish a manufactory in Meißen… and order his own pieces. Therefore, the extensive collection also holds some of the first Meissner pieces next to pieces of East-Asian porcelain. 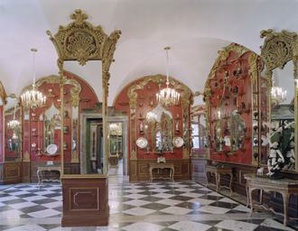 The Green Vault (Grünes Gewölbe) at the Royal Palace of Dresden

…is one of Europe’s most outstanding treasure chambers and oldest museums. Augustus the Strong’s view of art as an expression of wealth and power is shown in two presentations. Baroque excess is exposed throughout the historic presentation of 3000 objects, that are openly displayed (without a glass showcase) on ornamental tables in front of mirrors. In this modern exhibition, the visitors have the opportunity to observe details of fascinating works, from a cherry pit with 185 faces carved into it, up to the world‘s largest natural 41 carat green diamond. 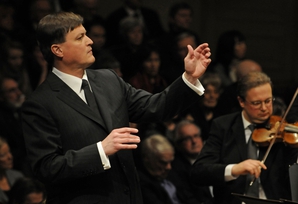 Built in 19th century by the famous architect Gottfried Semper, it is now one of the greatest buildings in theater architecture and home of the Saxon Staatskapelle, one of the most prestigious orchestras in Europe with the Conductor-of-Honor Sir Collin Davis (+2013).Numerous operas were premiered here, such as Tannhäuser by Richard Wagner or Salome and Elektra by Richard Strauss. 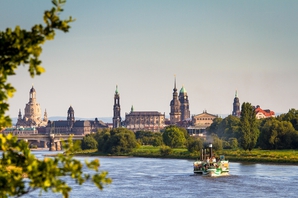 The city and the Elbe River

With over 60% of the city area being green, Dresden has many relaxing places to offer. The long meadows along the banks of the Elbe river offer flood protection and are vacant of buildings. Wine has been produced throughout the southern Elbe hillsides since the 16th century. Palaces and romantic premises characterize this part of the city until today. 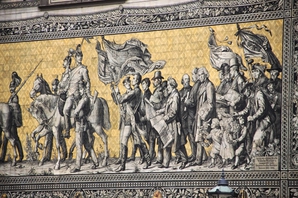 Mural depicting 800 years of the ruling Wettin dinasty in a mounted procession and painted on thousands of tiles of Meissen porcelain. 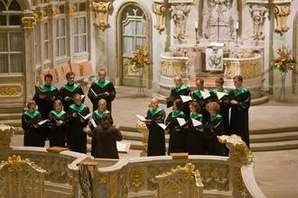 Church of Our Lady (Frauenkirche)

The Frauenkirche, or Church of Our Lady, was built from 1726-43 and was considered the most magnificent baroque church in northern Europe.

After the Allied bombing of Dresden in 1945, the stone walls literally crumbled. After the war, the once majestic church remained a ruin until an international appeal was launched in 1991. A group of Dresden citizens took the initiative to rebuild the church as a center of world peace. The extraordinary support for the reconstruction of the church was symbolized in 2000, when the Duke of Kent presented a replica of the orb and cross to the public which replaced those destroyed in  1945. 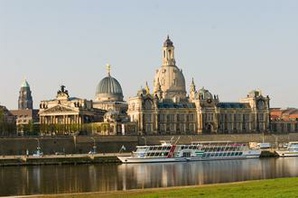 The Dresden Academy of Arts was built in the 19th century with its characteristic glass dome, crowned by a gilded bronze statue representing Fama, godess of rumours.

Home of the College of Fine Arts with different locations for changing exhibitions.

All prices including official taxes.